It’s morning time in Mexico City & the streets are filled with the aroma of el desayuno – breakfast. In a city that’s obsessed with food, there’s no shortage of options here. The ubiquitous street vendors fuel the bellies of millions of on-the-go chilangos as they start their day, from the tamaleros with their large pots filled with steaming hot tamales, to the panderos carrying baskets on their head loaded with delicious pan dulce (sweet bread). The key here is portability: anything that can be held in one hand, eaten in a few bites & have you on your way is always going to be a favourite among locals.

Tamales are famous in Mexico & for good reason; they are a complete & delicious meal in a portable form. Tamales are small parcels of masa (corn dough, the same kind that makes our nixtamal tortillas) with all kinds of fillings inside – pollo, salsa, mole, rajas, queso & more – wrapped in a corn husk or banana leaf & then steamed. The masa becomes firmer when it’s steamed, allowing for the tamal to be unwrapped & conveniently eaten on the go. You can find tamales at almost every corner of the city, & they’re especially popular at breakfast time.

As if tamales weren’t portable enough, ingenious street vendors have come up with a way to make them even more portable: eat them inside a bread roll, or bolillo! This iconic Mexico City breakfast snack is known as a guajolota, or torta de tamal, & we highly recommend you try it. The word ‘Guajolota’ literally means female turkey in Mexican Spanish, & there are varying stories as to how this street snack got its name. 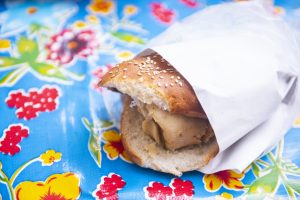 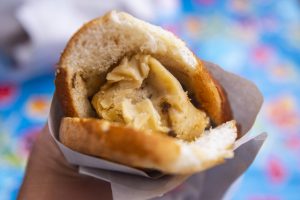 Atole is made with corn masa, water, sugar & cinnamon. If you’re looking for the ultimate pair for your fresh steaming tamal or guajolota, keep your eyes peeled for a hot beverage known as atole. It’s a traditional Mexican staple that dates back to the time of the Aztecs & Mayans. It’s designed to fill your stomach & warm you up quickly, so it makes the perfect breakfast beverage. You’ll also find variations of atole with different ingredients added to it. If you’re walking the streets of Mexico City & find atole called champurrado, we highly recommend trying it. It’s mixed with chocolate & is a real treat! 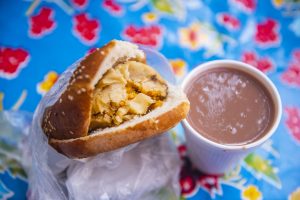 Another perfect accompaniment to your atole is pan dulce, literally meaning ‘sweet bread’. There are hundreds of varieties of pan dulce throughout Mexico, owed mostly to innovative bakers inspired by the French cultural influence on Mexican society particularly in the late 18th & early 19th centuries.

One of the most typical & famous pan dulces you’ll find on the streets of Mexico City is the concha. Literally meaning ‘shell’, this delicious semi-sphere shaped sweet roll is topped with crunchy sugary topping in a distinctive pattern that resembles a seashell. Conchas are very popular at breakfast time, especially dipped into your morning coffee, atole, champurrado or hot chocolate. You’ll find them, along with many other types of pan dulce, in bakeries, cafes, & in large baskets carried on the heads of street vendors who sell them in all corners of the city.

Garnachas are different types of antojitos (snacks) that are made out of corn masa & come in a variety of colours. Garnachas is a term that covers a number of different snacks found on the streets of Mexico City. The basis of these snacks are the same: a thick base of masa (corn dough), fried & topped with beans, shredded meats, queso fresco, salsa & other traditional toppings. From these foundations, a variety of different shapes & combinations exist, each with a different name, but all equally delicious. Around the city, you will find street vendors frying their garnachas on large round comales (Mexican frying pans), with hungry commuters gathering around for their breakfast fix. 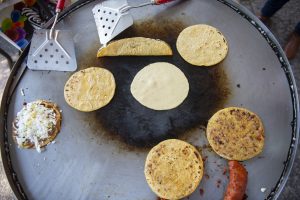 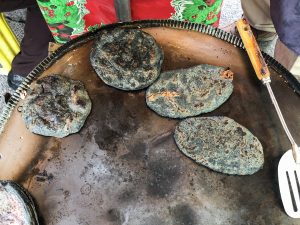 Sopes are another popular garnachas you will find on your morning stroll. It wouldn’t be a stretch to describe sopes as the equivalent of a Mexican pizza. They are pinched on the edges to make them the ideal plate for the ingredients that then go on top. It would take you a long time to try every sope variety because you can put almost anything on them. From frijoles & queso, to lettuce, salsa & steak, to anything else you can find or think of. It’s no wonder we love this dish & it has become a staple of Mexican breakfasts.

Huaraches are another type of Garnacha street snack you will find at countless street stores. They are similar to sopes except the base is generally larger & oval-shaped like the sole of a sandal, which is where it gets its name from (huaraches are a type of typical Mexican sandal).

Gorditas are another must-try type of garnacha. They can be described as patties of corn thicker than normal corn tortillas that are commonly mixed with chicharrón prensado (crunchy pork skin), sliced in the middle (as you would slice a pita bread) & stuffed with fresh queso, onion, coriander & your favourite salsa. 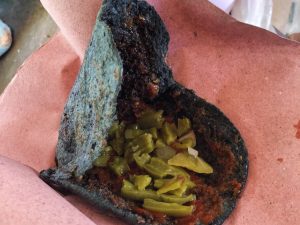 Quesadillas have become famous all around the world & have a reputation for being versatile & easy to eat on the go. To put it simply, they are a corn tortilla folded in half with fillings. You may be shocked to know that in Mexico City quesadillas may or may not contain queso (this is a hotly contested topic & an issue that divides Mexico City dwellers from the rest of the country!). You’ll find all sorts of quesadilla varieties as you move around the city so don’t hesitate to try one that looks unique & tasty. 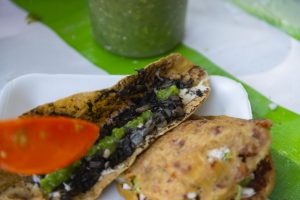 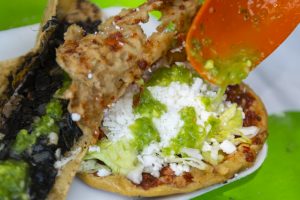 Chilaquiles are Mexico’s authentic version of ‘nachos’ (that’s right, you won’t find ‘nachos’ in authentic Mexican cuisine!). They are much saucier than nachos & we think they taste much better, too. Chilaquiles are deep-fried tortilla triangles covered in salsa roja or verde, & served with crema, queso & coriander, & can have almost any protein added on top if you’re feeling extra snackish. You can add fried eggs, shredded chicken, sliced beef…  The options are limitless. This is a typical breakfast dish, but can be eaten any time of the day.

As they are so easy to make, it’s very common to cook them at home. However, innovative street vendors have come up with a way to turn chilaquiles into the perfect portable street food. They do this by serving them in a bread roll (or bolillo)! They are then known as torta de chilaquiles, this is a very typical Mexico City street snack. If you find yourself craving a tasty morning hangover cure after too many mezcals or cervezas, the torta de chilaquiles will be your new best friend. 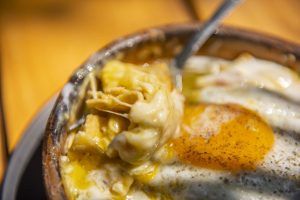 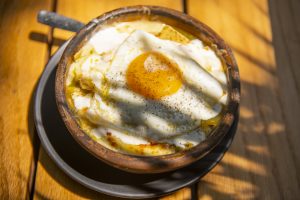 Molletes are similar to an open-face toastie. They’re easy to make at home but perfect for on-the-go, & this is why you’ll find them at street food stores all over the city. They’re made out of a bolillo (bread roll) sliced in half, covered with frijoles refritos, queso & then toasted. You can also add pico the gallo (a mixture of chopped onion, tomato & green chilli) as a garnish for some extra flavour.

This is just the tip of the iceberg when it comes to Mexican breakfasts & what you can find on the bustling streets of Mexico City. So when you visit, don’t skip this important meal, it’s sure to be a highlight of your day. 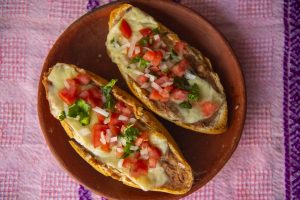 Are you looking for more articles about Mexican cuisine & culture? See our other articles or subscribe to our updates.